Written by jajohnson on February 24, 2015. Posted in Featured, News. 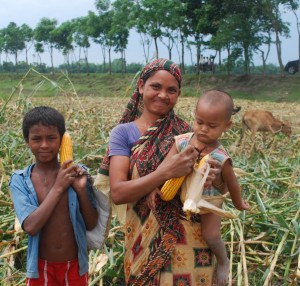 The damaging effects of climate change on agriculture have already been felt throughout much of South Asia, and climate model studies predict that this trend will not end anytime soon. According to a 2009 report from the Asian Development Bank, maize production capacity in South Asia could decrease by 17 percent by the year 2050 if current climate trends continue. Due to the temperature sensitivity of key crops such as maize, farmers in the region urgently need access to seed of varieties that can withstand temperature stress. As climate change-related weather extremes threaten agriculture in South Asia, research and development partners are seeking solutions.

The HTMA “…balances up-stream and down-stream research for-development by leveraging CIMMYT germplasm with the research capacity and expertise of partners such as Purdue University, Pioneer-Asia and national programs in Bangladesh, Pakistan, Nepal and Bhutan,” said P.H. Zaidi, the project leader. HTMA private partners such as DuPont Pioneer and the regional seed companies Kaveri Seeds and Ajeet Seeds have direct ties to local markets and farming communities that will foster the widespread availability and use of the new hybrids, according to Zaidi.

Outputs of this partnership include new breeding lines with enhanced levels of heat tolerance. The first generation of heat-tolerant hybrids from those lines became available after the second year of the project, and a new set of elite, stress-resilient hybrid varieties will be released by the project every two years. Apart from this, early-generation lines are being shared for use in partners’ breeding programs, strengthening their germplasm base and ensuring the continued development and delivery of heat-stress-resilient maize after the project ends, Zaidi said. According to the Feed the Future report: “The new varieties… show great promise to be taken to scale and deployed in tropical climates beyond South Asia.”