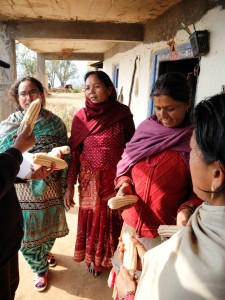 In 2007, three women from a hill community in Nepal came together to create a women’s cooperative. “Out of the maize we used to plant, we did not even get to eat half,” said a member from the self-started cooperative. “So we would work in other people’s fields while our own fields turned fallow.”

Maize is a vital crop on the hills of Nepal, particularly among poor families and disadvantaged groups. About 78 percent of Nepal’s maize is grown in the hills, chiefly by small-scale, resource-poor farmers. However, their limited access to improved seeds, new technologies and market information has resulted in low maize productivity and quality.

The Hill Maize Research Project (HMRP)** takes a proactive targeting approach to ensure a high degree of participation by women and disadvantaged groups in all its activities. As a result, women, whether of the dalit caste or Janajati (indigenous to Nepal), are the main beneficiaries of the project. Through the HMRP, they receive training in new methods to plant and grow maize, participate in research trials and have started community-based seed production (CBSP) groups.

HMRP has also introduced a number of farming systems and technologies to reduce women’s drudgery, such as grading and seed shelling machines, power tillers and intercropping of maize with ginger, tomatoes and soybeans. In negotiations with seed companies, the project has advocated giving the first priority for contracts to women’s groups and groups with a significant number of members from disadvantaged groups, proactively seeking a change in gendered practices among private sector actors.

The project’s joint focus on technology transfer and social inclusion has led to a series of positive outcomes including greater access to agricultural technologies, knowledge and extension services among women, and greater recognition of women as farmers and local leaders in the project areas. Some women also reported increased yield and income, leading to greater financial independence and decision-making power in the household.

Beyond the household, members of women-only CBSP groups in particular reported having greater bargaining power with seed traders. Some women’s groups have successfully demanded specific services (such as training in vegetable production) from their DADOs and financial support for their seed storage from the district development committee.

If successful, says Paula Kantor, transformative approaches will help to expand the range and quality of livelihood choices for men and women, including changes in their roles, responsibilities and voice within households, markets and communities. This will lead to shared decision-making in communities, greater equality between men and women, and more lasting improvements to agricultural productivity and food security.

* organized by APAARI, CIMMYT, FAO and the Department of Agriculture from Thailand from Oct 30 to Nov 1.

**led by the International Maize and Wheat Improvement Center (CIMMYT) and funded by SDC and USAID, in its fourth phase now