Biofortified vitamin A maize improves nutrition and livelihoods in Zimbabwe

Zimbabwean farmer Steven Seremwe is one of about 250,000 farmers who have benefited from biofortified vitamin A maize through the Zimbabwe Livelihoods and Food Security Programme (LFSP).

Admire Shayanowako is no stranger to agriculture or the problems that smallholder farmers in Africa face. The 31-year old maize researcher grew up on a small farm in Zimbabwe where his family was constantly plagued by parasitic weeds. Now based at the University of Kwazulu Natal in South Africa, he is working on biocontrol agents and maize genetic resistance against Striga, also known as “witch weed”. He was recently recognized for his innovative research as one of the winners of the 2019 Maize Youth Innovators Awards – Africa, in the category of “researcher” at an awards ceremony in Lusaka, Zambia on May 9.

Good weed management, conservation agriculture, and use of manure and compost are recommended to help control fall armyworm in Africa. 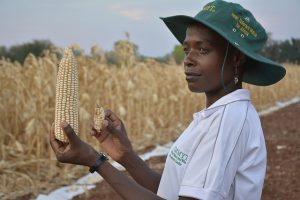