Multispectral and thermal images taken by cameras on unmanned aerial vehicles (UAVs) are helping researchers to monitor the resistance of maize to foliar diseases.

A new study from researchers at the International Maize and Wheat Improvement Center (CIMMYT) can reduce challenges associated with plant disease assessment in the field. By deploying cameras mounted on unmanned aerial vehicles (UAVs) that capture image information from non-visible sections of the electromagnetic spectrum, the interdisciplinary team demonstrated the effectiveness of remote sensing technologies in maize disease phenotyping.

“Plant disease resistance assessment in the field is becoming difficult because the breeders’ trials are becoming larger, the trials have to be conducted in multiple locations, and because sometimes there is a lack of highly trained personnel who can evaluate the diseases,” said Francelino Rodrigues, CIMMYT Precision Agriculture Specialist and co-lead author of the study. “In addition, the disease notes taken in the field by a human eye can vary from person to person depending on the persons’ experience.” 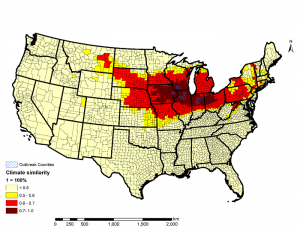 Figure: Maize-producing counties in the USA that are vulnerable to Tar Spot Complex (TSC) of maize, developed based on climate analogue model analysis procedure matching historic climatic data of 13 counties where TSC has been detected.

A new study shows that nearly 12 million hectares of the maize-growing USA, approximately 33 percent of the entire maize-growing area of the country, might be vulnerable to a disease called Tar Spot Complex (TSC).

Even a one percent loss in maize production caused by the disease in this area could lead to a reduction in maize production of 1.5 million metric tons of grain, or approximately $231.6 million in losses. Such production losses would not only affect the $51.5 billion US maize industry, but also the food security in a number of low-income countries that are heavily dependent on maize imports from the US.

The emergence and spread of new crop diseases or new variants of already established diseases around the globe over the last decades have generated serious threats for food safety and security. Therefore, the improvement of crop disease resistance has become one of the key focus topics of research at the International Maize and Wheat Improvement Center (CIMMYT).

The intent of this study is to raise public awareness regarding potential TSC outbreaks and to develop strategies and action plans for such scenario.

This study was published by an interdisciplinary team of CIMMYT scientists in the journal of Mitigation and Adaptation Strategies for Global Change regarding the potential threats of TSC in the US and its global consequences. Within this article, ex-ante impact assessment techniques were combined with climate analogue analysis to identify the maize growing regions that may be vulnerable to potential TSC outbreaks in the USA.

This work was supported by the CGIAR Research Program on Maize (MAIZE). 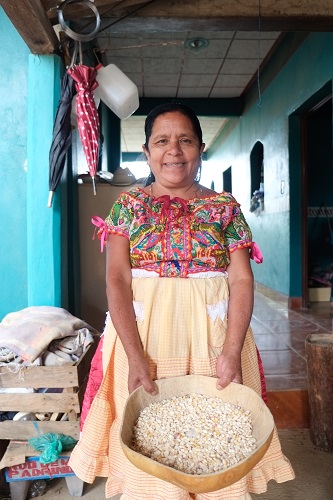 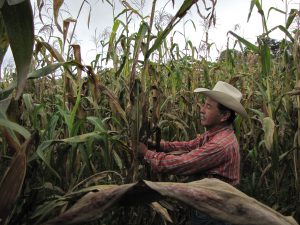