Malawi must harness the innovative minds of its youth for a climate smart future: Blessings Likagwa

Blessings Likagwa has a passion for farming. The 29-year-old farmer from Kasungu, Malawi was recently recognized by the 2019 MAIZE Youth Innovators Awards – Africa for his work using data from drones to implement climate smart improvements on his maize farm, and inspiring other local farmers to do the same. Blessings is the first ever winner in the “farmer” category of the awards.

These awards, an initiative of the CGIAR Research Program on Maize (MAIZE), recognize the contributions of young women and men below 35 years of age who are implementing innovations in African maize-based farming systems. This is the second year of the awards, and the first time to be held in Africa. The award ceremony took place in Lusaka, Zambia during the annual Stress Tolerant Maize for Africa (STMA) project meeting May 7-9, 2019.

NEW YORK and TEXCOCO, Mexico — Working together to improve access to and availability of climate-resilient maize varieties in eastern Africa, the Clinton Foundation and the International Maize and Wheat Improvement Centre (CIMMYT) are launching a partnership that will not only improve access by smallholder farmers to modern maize varieties but also aim to bolster food security in Malawi, Rwanda and Tanzania. The Clinton Foundation is launching this partnership through the Clinton Development Initiative, which works in the region to improve economic opportunity for farmers through better access to markets, technology, and inputs like seeds and fertilizer.

The maize seed sector in East and Southern Africa is male-dominated. Most seed companies operating in the region are owned and run by men. Often access to land and financial capital can be a constraint for women who are keen on investing in agriculture. However, there are women working in this sector, breaking social barriers, making a contribution to improving household nutrition and livelihoods by providing jobs and improved seed varieties.

The gender team within the International Maize and Wheat Improvement Center (CIMMYT) Socioeconomics Program interviewed 9 women involved in the seed business in this region as part of a collection of stories that will be published as a book this May. In honor of International Women’s Day, held March 8, 2019, the CGIAR Research Program on Maize (MAIZE) and CIMMYT would like to share some of their stories to recognize these women—and many others like them—and highlight the important work that women do in seed systems in Africa.

This is Grace Malindi, and this is her story:

Dr. Grace Malindi, 67, started Mgom’mera in 2014 with her sister Florence Kahumbe who had experience in running agro-dealer shops. Florence was key in setting up the business particularly through engagement with agro-dealers, while Grace’s background in extension was valuable in understanding their market. Grace has a Ph.D. in Human and Community Development with a double minor in Gender and International Development and Agriculture Extension and Advisory from the University of Illinois Urbana-Champaign in the U.S. Mngom’mera is a family-owned enterprise. Grace’s three children are involved in the business, serving as directors. Her sons Ulemu and Mwai advise on strategic partnership, marketing and business development while her daughter Darlis shares her expertise in finance and accounting. She designed the company’s accounting systems and trained staff on it. 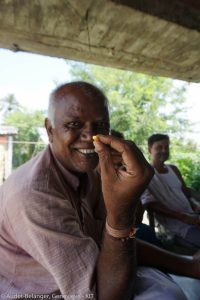