When a maize lethal necrosis (MLN) outbreak happened in Kenya in 2011, scientists knew they needed to act fast. This viral disease, new to Kenya, was decimating maize fields. Within a few years, the viral disease spread rapidly in eastern Africa, through both insect vectors and contaminated seeds. If the virus were to spread into southern or West Africa, it would spell disaster for the smallholder farmers across the continent who depended on maize as a staple crop and for their family’s income and livelihoods.

The maize lethal necrosis (MLN) artificial inoculation screening site in Naivasha, Kenya will begin the second interval of its phenotyping (screening/ indexing) cycle of 2019 at the beginning of April 2019. Interested organizations from both the private and public sectors are invited to send maize germplasm for screening.

When maize lethal necrosis (MLN) was first reported in Bomet County, Kenya, in September 2011 and spread rapidly to several countries in eastern Africa, agricultural experts feared this emerging maize disease would severely impact regional food security. However, a strong partnership across eight countries between maize research, plant health organizations and the private seed sector has, so far, managed to contain this devastating viral disease, which can wipe out entire maize fields. As another emerging pest, the fall armyworm, is making headlines in Africa, African countries could learn a lot from the initiatives to combat MLN on how to rapidly respond to emerging crop pests and diseases. 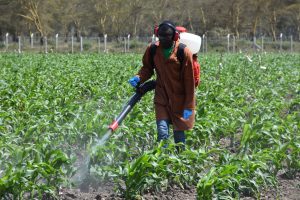 The third installment of the 2018 maize lethal necrosis (MLN) phenotyping (screening/ indexing) cycle will be held in July 2018 at the MLN artificial inoculation screening site in Naivasha, Kenya. Interested organizations from both the private and public sectors are invited to send maize germplasm for screening.