Time to scale up fight against the voracious pest

Despite significant efforts to control the spread of the invasive Fall Armyworm, first detected in Africa in 2016, the pest keeps advancing to new areas in sub-Saharan Africa and beyond.

The effects of its insatiable appetite continue to be felt across the continent as it feeds on many crops in addition to maize, with for instance an increasingly growing appetite for sorghum and millet. Without appropriate action, the Fall Armyworm threatens to cause billions of dollars in annual damage to African food staples. 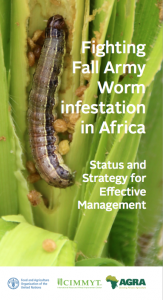 NAIROBI, Kenya – Smallholder farmers in eastern, southern and western Africa are facing a major threat to their crops from the fall armyworm, which has so far damaged almost 300,000 hectares of maize.

To address this rapidly unfolding emergency, about 130 experts and stakeholders from African governments, international and national agricultural research organizations, non-governmental organizations, national plant protection organizations, development partners, and donor agencies will meet on April 27 and 28, 2017 in Nairobi to discuss and develop an effective management strategy against the fall armyworm pest in Africa.