A report by CIMMYT maize scientists highlights the benefits, both current and potential, of doubled haploid (DH) technology in a recent article published in Theoretical and Applied Genetics.

The word haploid indicates that the cells in a plant has half the number of chromosomes as its parent. Haploids occur very rarely in maize but their frequency can be increased significantly by using haploid inducers, which are specific genotypes of maize with defects in their pollen. Haploids can be separated from diploids using several phenotypic markers at the seed or seedling stage. Haploids are sterile, so they must undergo chromosome doubling in order to begin meiosis and reproduce. Doubled haploids are formed through the spontaneous or artificial duplication of chromosomes in identified haploids.

CIMMYT scientists have laid out several objectives for the future of doubled haploid breeding in this report. Focus areas involve improving the haploid induction rate (HIR), improving the speed and accuracy of haploid identification, increasing the chromosomal doubling rates and improving the seed yield from doubled haploid plants. Various methods to achieve these improvements are outlined in the manuscript.

The DH process is invaluable in maize breeding because it cuts the time required to breed targeted varieties significantly. Because of this, seeds of improved varieties can be developed and sent out to consumers quickly and efficiently. The global need for maize as food and feed is increasing. CIMMYT works to keep up with this demand and provide food for all who need it.

CIMMYT and UAS-Bangalore to establish a maize doubled haploid facility in Karnataka, India 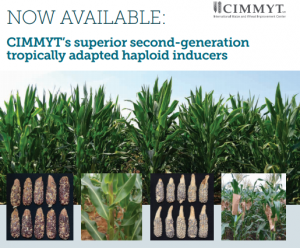 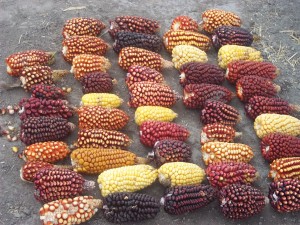 Purple maize varieties with high anthocyanin accumulation can have significant nutritional and economic value, but cannot be identified using the R1-nj marker.

Doubled haploid (DH) technology provides important benefits to maize breeding programs, as DH lines enhance genetic gains and improve breeding efficiency in addition to offering significant economic advantages. DH lines can be generated in less than half as many seasons as lines generated through traditional breeding, thus saving valuable time, resources and energy. The large scale production of DH lines is dependent on the identification of haploids at an early seedling stage. Haploids have traditionally been identified by the R1-nj (Navajo) anthocyanin color marker which, when crossed with haploid inducer lines through induction crosses, will produce haploid progeny seed with purple markings on its outer layer, or pericarp. This is to differentiate haploid from diploid seedlings, which are not useful for DH breeding.