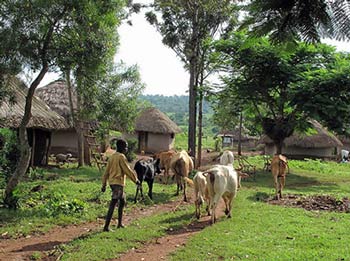 The inherent nature of mixed systems often implies competing uses of crop residues since they are not only used as feed but also as mulch/soil amendments, fuel and construction material, both within the mixed farm and/or by others.

Introducing maize stover, the above-ground biomass left after grain harvest, into India’s commercial dairy systems could mitigate fodder shortages and halt increasing fodder costs, according to new research by CIMMYT and the International Livestock Research Institute (ILRI). The two organizations collaborated on the Cereal Systems Initiative for South Asia project (CSISA), which is funded by the Bill & Melinda Gates Foundation (BMGF) as well as MAIZE. Their study shows that while significant variations exist among maize cultivars in terms of their stover quantity and fodder quality, stover from some high-yielding popular hybrids is at par or even better value with the best sorghum stover traded. Sorghum stover supports much of the urban and near-urban dairy production in peninsular India.