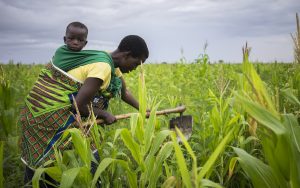 According to the Food and Agriculture Organization of the United Nations (FAO), food availability in sub-Saharan Africa has increased by nearly 12 percent over the past two decades. From 1990-92 to 2014-16, the prevalence of undernourishment in sub-Saharan Africa decreased from 33 percent to 23 percent. However, the fight is certainly not over. The FAO reports that the total number of undernourished people continues to increase, from 175.7 million in 1990-92 to 217.8 million people in 2014-16.

For this reason, MAIZE and its partners are working to increase the adoption and consumption of biofortified Vitamin A “orange” maize in Kenya and Zimbabwe despite biases towards non-white maize, in order to decrease “hidden hunger” and malnutrition. Recent blind taste tests have shown that the majority of both male and female farmers prefer the taste of orange Vitamin A maize to traditional white maize – excellent news in the fight to end preventable blindness and death from Vitamin A deficiency. 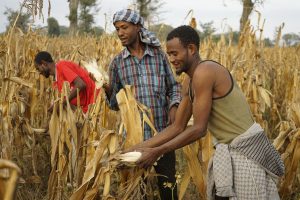 Drought tolerant maize varieties developed by the Drought Tolerant Maize for Africa (DTMA) project now help ensure food security for farmers and their families despite devastating droughts caused by El Niño in Ethiopia and Zambia. In addition, these varieties are being used to build up the country’s drought tolerant maize seed business, through small local seed companies that CIMMYT partners with to improve maize production and marketing for small-scale farmers.

MAIZE, under lead Centers CIMMYT and IITA, has long worked to protect farmers from crop losses to deadly weeds such as Striga as well as health risks due to the harmful mold aflatoxin. The recent release of the StrigAway™ technology package with herbicide resistant seeds will complement MAIZE and partners’ efforts towards Striga management. IITA recently announced the launch of the new biocontrol technology aflasafe KE01TM, proven effective in reducing aflatoxin contamination by 70 – 80 percent in trials in farmers’ fields in Kenya. This new technology will help fight aflatoxin’s negative consequences on health, trade, and food security.

These are just a few of the recent success stories of the many research activities MAIZE and its partners conduct throughout the region. Through the leadership of lead Centers CIMMYT and IITA, and the strength of our many valued partnerships, MAIZE will continue to work for improved food security and livelihoods for farmers, their families, and their communities, across Africa and the world.