Nutritious Maize for Ethiopia and gender 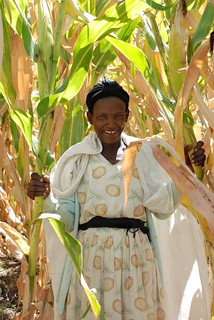 The Nutritious Maize for Ethiopia (NuME) aims to develop and promote quality protein maize (QPM) in the major maize growing areas of Ethiopia, including the highlands and the dry lands, to improve nutritional status of children. The project has a strong gender component, ensuring women’s full participation in all activities and equal share of benefits, which was discussed during a Gender Analysis and Strategy workshop at the ILRI campus in Addis Ababa, Ethiopia, on 16 April 2013. The purpose of the event was to present gender analysis and gender strategy developed by Kidist Gebreselasie, NuME gender consultant, to implementation partners, receive partners’ input, agree on strategy, and discuss future developments. The workshop was attended by representatives from the Ethiopian Institute of Agricultural Research (EIAR), ministries of health and agriculture, the Ethiopian Health and Nutrition Research Institute (EHNRI), SG2000, FRI, the Ethiopian Seed Enterprise, other seed companies, Hawassa University, Harvard Institute of Public Health, and CIDA (the project’s funder). CIMMYT was represented by Dagne Wegary (interim project coordinator), Dennis Friesen (project advisor/consultant), Vongai Kandiwa (gender specialist), and Hugo De Groote (agricultural economist).

In the opening session of the workshop, Gebreselasie presented her synthesis developed in collaboration with CIMMYT scientists and based on literature review, analysis of a baseline survey (both men and women were interviewed), and an indepth study of two target areas (including focus group discussions and key informant interviews). Gebreselasie found that while men are responsible for plowing and purchase of inputs, including seed, women are responsible for household chores such as cooking and child care. However, both men and women contribute to harvesting and weeding. Planting is either a shared activity, or one done by men. Children are also involved in agricultural activities as they play an important role in herding animals and providing feed and water. Dairy and poultry production management is largely a women’s responsibility; although women receive a substantial part of the income resulting from these activities, their access to resources, as compared to men’s, is largely limited, particularly when it comes to extension services. The agricultural extension system focuses on men and female-headed households; wives are expected to learn from their husbands. Women are also rarely invited to agricultural trainings, especially when they take place outside of their own farm. It is much easier for women to access health extension than agricultural extension workers.

Gebreselasie then outlined a gender strategy to address the above listed constraints and to improve women’s participation in project activities. This involves increasing women’s attendance at QPM demonstrations by inviting them directly and by organizing separate sessions for women during field days, ensuring that the time and place is convenient for them. Gebreselasie suggested involvement of health extension workers in QPM promotion and higher level of women’s involvement in farm radio activities (targeting women). Furthermore, partners should be given incentives to involve women more, and they should also be provided gender training at all levels.

After the presentation, the workshop participants reviewed their organizations’ experiences in gender activities and their responses to the analysis, and discussed ways to incorporate the strategy in their activities.

The NuME gender strategy was later presented and discussed during a meeting of the Project Steering Committee on 23 May at ILRI. CIDA representative Stefna Pacquette emphasized that the strategy needs to involve women in a meaningful way beyond simple participation in project activities. “While focusing on nutrition, NuME can provide a vehicle for strengthening women’s role in the household,” Pacquette noted. “It can also get men to feel more comfortable with women’s presence and participation in traditional male roles.” The next necessary step for NuME is the recruitment of a gender specialist to aid implementation of the strategy.