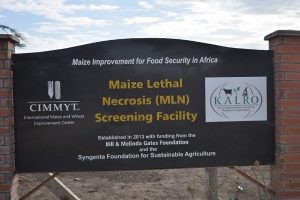 The maize lethal necrosis (MLN) artificial inoculation screening site in Naivasha, Kenya will begin its second screening cycle of 2017 at the end of October, interested organizations from both the private and public sectors are invited to send maize germplasm for screening.

In 2013, the International Maize and Wheat Improvement Center (CIMMYT) and the Kenya Agricultural & Livestock Research Organization (KALRO) jointly established the MLN screening facility at the KALRO Naivasha research station in Kenya’s Rift Valley with support from the Bill & Melinda Gates Foundation and the Syngenta Foundation for Sustainable Agriculture.

MLN was first discovered in Kenya in 2011 and quickly spread to other parts of eastern Africa; the disease causes premature plant death and unfilled, poorly formed maize cobs, and can lead to up to 100 percent yield loss in farmers’ fields.

CIMMYT and partners are dedicated to stopping the spread of this deadly maize disease by effectively managing the risk of MLN on maize production through screening and identifying MLN-resistant germplasm. The MLN screening facility supports countries in sub-Saharan Africa to screen maize germplasm (for hybrid, inbred and open pollinated varieties) against MLN in a quarantined environment.

This is the largest dedicated MLN screening facility in East Africa. Since its inception in 2013, the facility has evaluated more than 120,000 accessions from more than 15 multinational and national seed companies and national research programs.

More information about the disease and resources for farmers can be found on CIMMYT’s MLN portal.

Please note that it can take up to six weeks to process imports and clear shipments.

For assistance in obtaining import permits and necessary logistics for the upcoming screening, please contact: