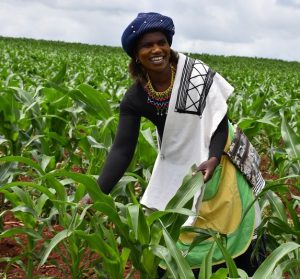 Nontoko Mgudlwa, a smallholder farmer who planted TELA maize for the first time since its release in South Africa. Photo: B.Wawa/CIMMYT

Smallholder farmers in South Africa can now access and grow new maize varieties with transgenic resistance to stem borers, the most damaging insect pest of maize.

Partners in Water Efficient Maize for Africa (WEMA) – a public-private crop breeding initiative that helps farmers manage the risk of drought and stem borers infestation in Africa –developed the genetically modified maize seed branded as “TELA” that has been released and  licensed to seed companies in South Africa at royalty-free to sell to farmers at an affordable cost.

During the last 2016 planting season, Nontoko Mgudlwa was one among the selected smallholders to host a trial for TELA maize hybrid.

“I received a small packet of TELA from our extension officer, and planted it in this small portion of land on December 9, 2016,” said Mgudlwa. “The land was not enough to add my indigenous maize, but I’m very happy to see how the crop is performing despite the very visible attack on the border crop by stem borers,” continued Mgudlwa, pointing out the severely damaged border crops that were planted with refuge seed as a control group alongside TELA.

The farmers who hosted trials were given a 2 kilogram packet of TELA maize as part of demonstrations to raise awareness about the variety and help farmers seed its performance. The packet also contained a small pack of seed of non-Bt maize called refuge seed sow at the border of the main plot. This non-Bt maize provides refuge that allows survival of susceptible borers and thus delays the emergence or spread of borers able to overcome the Bt maize resistance in borer populations.

Mgudlwa’s home in Nqatu Great Palace suffers frequent borer infestation, which most farmers control using insecticides. As part of the trial, Mgudlwa did not use chemicals despite a heavy invasion of the pests on her farm and evidence of significant damage in the refuge crop.

“It is critically important for farmers to understand the requirement and procedure of planting TELA maize and the refuge seed found in a small bag inside the TELA seed pack,” said Kingston Mashagaidze, WEMA project coordinator in South Africa. “The extension officers have been trained on how to plant TELA and the refuge seed, so they can help farmers to plant the crop the right way.”

Recently, Mozambique joined Kenya, Tanzania and Uganda to successfully conduct confined field trials (CFT) for genetically modified maize. The CFTs are important to generate data on the performance of the Bt maize and commercial conventional hybrids infested by stem borers to support the application for the release of TELA hybrids in the remaining four WEMA countries.