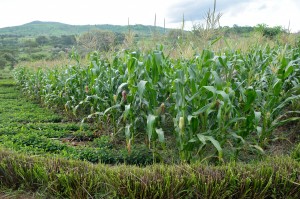 The Decision Support System for Agro-technology Transfer (DSSAT) model was calibrated with experimental data comparing conventional tillage, conservation agriculture and maize-cowpea rotation practices collected at Chitedze Research Station in Malawi. The model was then applied to seasonal weather predictions in a climate change scenario to determine which crop management options would be the least risk or most efficient for farmers to adapt.

In field experiments, CA maize-cowpea rotation brought 1335 kilograms per hectare more than conventional tillage over the six growing seasons and the DSSAT model predicted maize yields well, though it may tend to underestimate the cumulative benefits of crop rotation as soils recover from years of monocropping. When applied to the climate prediction until 2030 the model found that conservation agriculture, particularly with maize-cowpea rotation, brought significantly greater yields and were less affected by drier seasons than conventional tillage.

Though the DSSAT model was useful to predict the effects of zero till and crop residue retention, it fared poorly for crop rotation. The model also contains no algorithms for other CA treatments such as intercropping.

Identifying the most effective technologies is only the first step towards preparing farmers to face changing climates. The authors of the paper call for innovative ways to convince farmers concerned with their short-term food security to adopt conservation agriculture practices.

The study was realized with the support of the International Maize and Wheat Improvement Center (CIMMYT) under the CGIAR Research Program (CRP) on Climate Change, Agriculture and Food Security (CCAFS) and MAIZE CRP. Funding was also provided by Bundesministerium für wirtschaftliche Zusammenarbeit (BMZ), the German Technical Cooperation (GIZ) and the International Fund for Agriculture Development (IFAD).