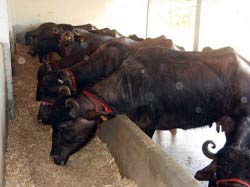 Introducing maize stover into India’s commercial dairy systems could mitigate fodder shortages and halt increasing fodder costs, according to new research by CIMMYT and the International Livestock Research Institute (ILRI). The two organizations collaborated on the Cereal Systems Initiative for South Asia project (CSISA), which is funded by the Bill & Melinda Gates Foundation (BMGF), as well as the CGIAR Research Program on MAIZE. Their study shows that while significant variations exist among maize cultivars in terms of their stover quantity and fodder quality, stover from some high yielding popular hybrids is at par or even better value with the best sorghum stover traded. Sorghum stover, the above-ground biomass left after grain harvest, supports much of the urban and near-urban dairy production in peninsular India.

Between 130 and 200 tons of sorghum stover are sold daily in the fodder markets of Hyderabad alone. Some of the stover is transported several hundred kilometers and costs, on a dryweight basis, about 50% of the price of sorghum grain, which is up from 20 to 30% just 15 years ago. Sorghum stover’s high monetary value can be explained by India’s demand for sorghum fodder, and possibly to a decline in the area of sorghum planted. The crop has been replaced with maize in some regions. Dairy farmers and fodder traders in India generally think maize stover is less suitable than sorghum stover as livestock feed. To challenge the negative perceptions about maize stover, maize stover of a popular high-yielding hybrid with high-quality stover fodder was provided to a commercial dairy producer in the state of Andhra Pradesh. 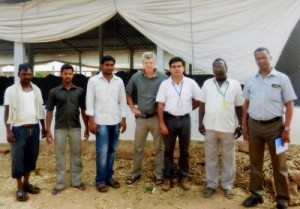 This study demonstrated the big potential benefits for India’s smallholder rainfed maize and dairy farmers of adopting dual-purpose, food-and-feed maize cultivars, which combine high grain yield with high fodder quality. In this way, farmers can help solve the problem of fodder scarcity while increasing the benefits of their maize cropping. “Poultry and animal feed has been the major driver for unprecedented increase in demand of maize in South & Southeast Asia. The dual-purpose maize, with high stover quality along with high grain yield, is emerging as another big driver that can further add in the increasing demand for maize in this region” says CIMMYT Maize Breeder P.H. Zaidi, who is actively collaborating with ILRI-Hyderabad, India.