The CGIAR research program on MAIZE has made great strides in addressing challenges related to agriculture and food security in maize-based systems since its launch in 2012. Now nearing the end of its first cycle in 2016, the CGIAR intends to build on the success and lessons learned from MAIZE and the 15 other CRPS as they move into the second generation of CGIAR research programs. This second generation will form a new coherent, integrated portfolio with greater emphasis on interactions between programs – with eight agri-food system programs and five cross-cutting global integrating programs. These 13 new programs are designed to ensure a more coherent approach to CGIAR’s contribution to achieve targets laid out in the recently approved CGIAR 2016-2030 Strategy and Results Framework – addressing poverty, malnutrition and environmental degradation. 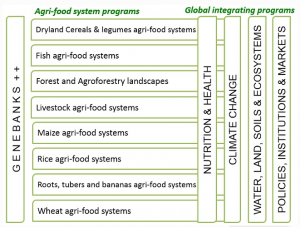 “As an Agri-food Systems CRP, MAIZE will take a whole value chain approach instead of concentrating almost exclusively on the production-end of the value chain (improved seed and sustainable intensification options),” said Dave Watson, MAIZE CRP program manager. “The new CRP will actively address the challenge of increasing productivity, and enhancing livelihoods, while managing place-based synergies and trade-offs in multi-crop/livestock systems between producers, consumers, and the environment.”

MAIZE is currently drafting its pre-proposal, due August 15th, which will specify its theory of change, the expected impact pathway, and the outcomes it proposes to achieve that demonstrate its contribution towards impact. Partnerships will remain critically important to the CRPs in order to achieve impact at scale, and each pre-proposal will indicate the strategic partners in the program and their role.