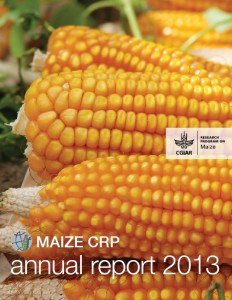 The MAIZE CRP annual report for 2013 has now been released, highlighting 11 particular successes in another exciting year.According to Dave Watson, MAIZE CRP Program Manager, 2013 was defined by strengthening new and existing partner collaborations.
Most notably, partners responding to the outbreak of maize lethal necrotic virus (MLN) in East Africa redoubled their efforts, culminating in the establishment of a dedicated MLN screening facility in Kenya. In total, 63 new maize varieties were released in target countries in Sub-Saharan Africa, South Asia and Latin America, while 17,000 tons of new-drought tolerant maize seed was released in Africa alone.

Adding value to a growing portfolio of work in improved maize, sustainable intensification and post-harvest management, the MAIZE Gender Audit was completed in 2013 and strong commitments made to the cross-CRP gender study. The MAIZE Competitive Grant Initiative has now funded 46 institutions to address research gaps such as the potential of dual-purpose maize to serve India’s growing crop and livestock needs, and support innovative approaches such as a project on farming systems analysis with Wageningen University.

The report, soon to be released in an innovative online format, is now available to download in high-quality and web-quality pdfs.