Learning from 8,000 people to integrate gender into agricultural research 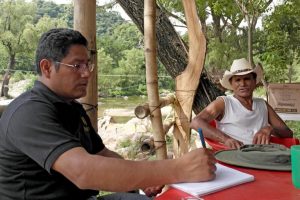 With its twisted cables and flickering computer screens, the room commandeered by the GENNOVATE study team at the headquarters of the International Maize and Wheat Improvement Center (CIMMYT) near Mexico City looks more like a Silicon Valley hackathon than what most would understand as gender research. Yet up on the main screen, questions are being asked of around 8,000 participants as part of a global gender study.

It is often a mystery why a new agricultural technology or practice can be successful in one community yet fail to have the desired effect in another. Social expectations of how men and women should behave may affect their ability to adopt or benefit from such innovations.

To understand how, researchers linked to 11 CGIAR research programs (CRPs) conducted guided discussion groups and interviews with women and men from 135 communities in 26 countries in Africa, Asia and Latin America.

By recording and analyzing their personal testimony, GENNOVATE aims to develop insights and practical tools to improve research design in the CGIAR group of agricultural research institutes.

The study is qualitative, meaning that methods were used to encourage participants to discuss topics of interest to the researchers from their own perspective. It is also comparative, with the same methodology being applied across deliberately varied contexts, with men and women from different age groups and socio-economic backgrounds.

As part of the study, once transcripts were collected and translated from 2,025 interviews and discussion groups, the next step was to tag every statement made with codes that can be read by the social science software NVivo. These codes indicate exactly what was being said, by whom and in what context, so that researchers can analyze statements on a wide scale.

To help design the coding framework and guide implementation, GENNOVATE recruited Patti Petesch as a consultant. Petesch has worked on several high-profile projects on poverty and gender for the World Bank that use a similar approach, including On Norms and Agency: Conversations about gender equality with women and men in 20 countries. The coding work required the efforts of two teams based in Mexico and Peru.

“Our use of NVivo goes a lot further than any of the major studies I’ve worked on before,” Petesch said. “We’ve invested a lot in having this powerful tool for drawing out patterns across the different communities and population groups reached.” 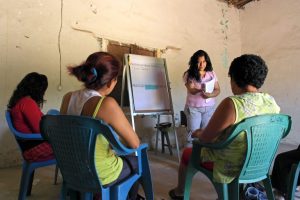 With the data collected and coded for analysis, the next question is what to look for. Using the data collected by the CIMMYT-led CRPs on Maize (MAIZE) and Wheat (WHEAT), the GENNOVATE team start by making exploratory queries – broad questions that might reveal patterns or contrasts in the testimony given by study participants across different contexts.

As an example, Petesch turns to a major topic of concern: “We find, for instance, young men and women on the outside nearly everywhere in the 27 communities visited by MAIZE,” Petesch said, explaining that young people encountered in the study were not frequently involved in agricultural decision-making.  “You can see it in the data, responses from adults on any agricultural topic number in the hundreds, while young people have much less to say.”

Through the analysis software, it is possible to ask the young participants in the study a hypothetical question:“What do you think the young men and women of your village should do when they finish studying?”

NVivo registers all of the statements by young people in which they mentioned an aspiration, showing that agriculture and natural resource management falls far behind non-agricultural livelihoods, education and parenting goals. Intriguingly, girls were twice as likely to hope for education in their future as boys.

This kind of general comparative analysis is of limited value, but helps to identify broad patterns and direct researchers to lessons about gender, agency and agriculture buried deeper in the data. NVivo also allows the researchers to dive right into crucial moments in the interviews and discussions, where what is being said is of importance to the question at hand. This allows their wide analysis to be supported by in-depth case studies of the research communities sampled.

CIMMYT gender specialist Lone Badstue, who leads the GENNOVATE executive committee, envisions a two-track approach for GENNOVATE to have an impact: authoritative research and institutional change in the CGIAR consortium of agricultural researchers.

MAIZE and WHEAT are collaborating with nine other CRPs, aiming to produce their respective GENNOVATE CRP reports by the end of 2016. These reports will be used to inform discussion on the implications of the study findings for agricultural research in the CGIAR, while consultations will be held with biophysical scientists to create focused tools that help them integrate gender in their daily work.

“You could imagine a future where if someone asks if you are an agronomist, they would assume that you know about gender,” Badstue said. “There is only a small pool of experts, so now is a good time for a young person to get into agriculture.”

In the meantime, GENNOVATE has already had an impact in terms of the national researchers trained to carry out the fieldwork. “In each country one team was trained in gender studies and qualitative analysis. That kind of capacity is often rare and difficult to find,” Badstue emphasized.