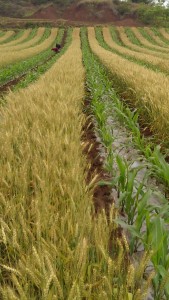 To accelerate the breeding cycle and continually develop the improved wheat varieties needed to meet global needs, novel approaches are needed to extend conventional selection methods, said Dr. Jesse Poland, an assistant professor at Kansas State University and director of the Feed the Future Innovation Lab for Applied Wheat Genomics, in his presentation on “Genomic Selection and Precision Phenotyping” at the Borlaug Summit on Wheat for Food Security.

However, each new technology can only be effective in combination with others, meaning that the disciplines of genetics, physiology, engineering and bioinformatics must come together in order to advance on the fundamental concepts of breeding established by Dr. Norman Borlaug more than 50 years ago.

Poland began by outlining the plant breeder’s equation that determines the efficacy of a breeding program. Key factors are the intensity and accuracy of genetic selection, the amount of genetic variation in the program and the number of years needed to complete a breeding cycle. Selection accuracy is how well you can determine a plant’s breeding value by observing its physical traits in the field (phenotyping) or using genomics; intensity refers to the size of the breeding population.

“The phenotype is what we eat”

Phenotyping is known as ‘genotyping by seeing,’ as it involves observing a crop’s physical characteristics in the field to determine genetic value, and this is the basis of plant breeding. Put simply, “the phenotype is what we eat,” explained Poland. Other fundamentals of breeding at CIMMYT are the international replication of field trials, the introduction of genetic variation from outside the program and shorter breeding cycles.

The last component is especially powerful, said Poland: “If you halve the number of years, you double the rate of gain.” Dr. Borlaug’s shuttle breeding program, taking advantage of varying climates in Mexico, managed to do so by harvesting twice within the same year.

As the basic concept for success in breeding remains unchanged, new tools in genotyping, precision phenotyping and data management must be used to accelerate the process.

“With advancements in DNA sequencing technology, it has become less expensive to determine the genotype of new breeding lines than to evaluate those same lines in yield trials,” said Poland. By compiling accurate data on the genomes and phenotypes of a test population, this information can be used to train a genomic selection model that predicts the value of individual seeds early in the breeding process based on their genome alone, thereby accelerating selection.

The key to this are modern ‘genotyping-by-sequencing’ (GBS) techniques, which have caused the cost of sampling to drop precipitously.

Because wheat has such a large genome, GBS focuses on capturing the most important sections which are then sequenced together using DNA barcodes, making the per-sample cost even less expensive. Thousands of these genetic markers have been referenced and anchored in the wheat genome and can accurately predict important traits such as grain quality that are time-consuming and expensive to evaluate in the field. This also helps breeders to maintain genetic diversity, the majority of which is not directly useful, by identifying seeds that combine rare alleles with desired traits.

However, to match phenomenal advancements in genomics, novel approaches for precision, high-throughput phenotyping are needed. “If we have messy phenotypic data going into the model, we can’t really expect to have accurate predictions,” explained Poland.

High-throughput phenotyping platforms (HTPPs) are automated or semi-automated, and must be accompanied by high-throughput data analysis tools. “If we spend more time analyzing the data rather than collecting it, it doesn’t really become a high-throughput approach,” said Poland. This is where the disciplines of genetics and bioinformatics meet plant physiology and engineering.

Along with data analysis, the two key elements of HTPPs are remote sensing and geo-location. These allow automated machines to capture accurate data in real time as they scan a crop in the field. One example is the near-infrared sensor used by the GreenSeeker, which scans the light reflected by plants to create a normalized difference vegetation index (NDVI), a simple way to measure plant coverage and condition. Sonar can also be used to measure plant height to centimeter-level precision, faster and more accurately than a researcher with a measuring stick.

Combinations of sensors can be attached to a ground vehicle or tractor, or even to an unmanned aerial vehicle to scan very large or remote areas with ease. Mounting them onto researchers themselves creates a ‘Bipedal Mobile Unit’ that is low-cost and easy to deploy around the world.

The speed at which new phenotyping platforms operate opens up the possibility of making several measurements over time. This allows researchers to study how genomes perform differently over time, allowing traits to be identified that were “previously intractable due to the sheer burden of assessing the field,” said Poland.

Finally, even small margins of error can grow into much greater problems during the many stages of a breeding cycle, so any applications or data management tools that increase the reliability of researchers can have an important impact.

Poland concluded by stressing the importance of having the fundamentals of a sound breeding program in place: “if this engine isn’t firing on all its cylinders there’s really not a lot of use in adding a turbocharger; the mechanics of the project must be functioning well and data management is key.”