The objective of the MAIZE gender strategy is:

To promote equality of opportunity and outcomes between resource-poor women and men farmers in maize-based systems.

Gender equality and equity are essential elements in the quest to further enhance agricultural growth, food security and sustainable use of the natural resource base. The MAIZE CRP Gender Strategy represents a concerted effort of the maize R4D community to systematically consider and address gender disparities in maize R4D and contribute to the promotion of gender equality in agricultural development in general.

The objective of the assignment was “to provide a solid analytical and operational input to the process of strengthening institutional capacity to integrate gender as an analytical tool for enhanced targeting and impact of research for development under MAIZE and WHEAT; and to devise realistic and practical Gender Action Plans for MAIZE and WHEAT.”

Among the first CRPs to undertake a gender audit of their activities, WHEAT and MAIZE organized a workshop on implementing the gender audits on 10-11 December 2012, facilitated by gender specialists Chris Hunter and Katrine Danielsen, both from KIT. 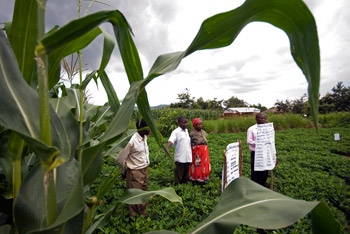 A gender audit is an assessment by which organizations can identify how they are addressing gender within their research programs and organization. It usually comprises surveys and focus group discussions involving organizations, partners and those who are ‘watching what the organization does.’ For MAIZE and WHEAT, it should provide a baseline for assessing progress on integrating gender into the CRPs and help prioritize activities.

The gender audit is being implemented in a phased approach. The initial collaborative Design Phase ran from September to December 2012, the Implementation Phase ran from January to September 2013 and the Participatory Analysis Phase took place in October 2013.

The Gender Audit focuses on four key questions and eight CIMMYT projects. This will lead to a detailed gender action plan.