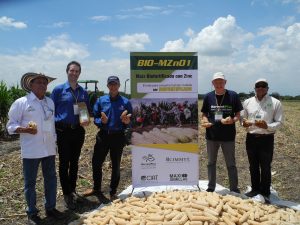 The new variety, known as BIO-MZN01, was developed by the International Maize and Wheat Improvement Center (CIMMYT) with the support of HarvestPlus in collaboration with the International Center for Tropical Agriculture (CIAT), the CGIAR Research Program on Maize (MAIZE) and the CGIAR Research Program on Agriculture for Nutrition and Health (A4NH). 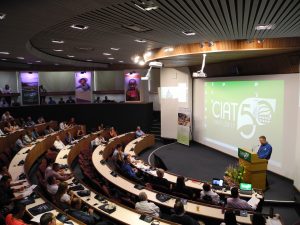 “The support that CIMMYT and CIAT have received from HarvestPlus has been fundamental in allowing our researchers to develop crops with enhanced vitamin and mineral content,” said Martin Kropff, CIMMYT director general. “The improved maize that we present today is an important example of the impact we can have when we work together in partnership.”

The minimum daily requirement for zinc is 15mg, but not everyone has access to foods with naturally occurring quantities of zinc, which makes this zinc-enriched maize variety a boost for nutrition in a region where maize is a staple food.

BIO-MZN01 contains 36 percent more zinc on average than other maize varieties, meaning that arepas (a common maize-based Colombian dish) made of this new variety offer consumers up to five times more zinc than those made with traditional varieties. Additionally, BIO-MZN01 can yield up to 6 to 8 tons per hectare(t/ha), nearly double the national average in Colombia of 3.7 t/ha and is tolerant to several maize diseases that are common in the region, including rust, turcicum leaf blight, and gray leaf spot. Plus It can be grown between 0 and 1400 meters above sea level during both cropping seasons in the country.

The official launch of BIO-MZN01 was held at CIAT in Palmira, Colombia, and was attended by local farmers, seed companies and government officials as well as CIMMYT, HarvestPlus and CIAT staff. As part of the launch, visitors and staff were invited into the field to see the variety firsthand and learn more about its properties and the history of its development. 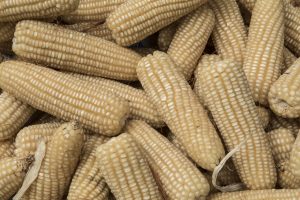 “The conservation and utilization of genetic diversity has been crucial for the development of this new biofortified variety, as well as other CIMMYT varieties with improved nutrition or resistance to climate change,” said Natalia Palacios, maize nutritional quality specialist at CIMMYT. “This has been an inter-institutional and interdisciplinary effort at all levels of the maize value chain.”

Other products of the CIMMYT/HarvestPlus partnership include zinc-enriched wheat and biofortified provitamin A maize, which helps to prevent blindness in children.

“We have been working with CIMMYT since HarvestPlus began,” said Marilia Nutti, the regional director for Latin America and the Caribbean at HarvestPlus. “The greatest advantage of working with CIMMYT is their quality research—CIMMYT has all of the knowledge of maize and wheat, and maize is a big part of the diet in Latin America. Meanwhile, HarvestPlus and CIAT already had the partnerships on the ground in Colombia to ensure that this improved zinc maize could get to farmers and consumers. This has truly been a win-win partnership to improve nutrition.” 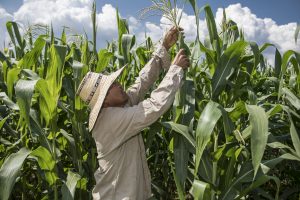 The scientific work conducted at CIMMYT, HarvestPlus and CIAT reaches the hands of farmers through local seed companies such as Maxi Semillas S.A.S., a partner of CIMMYT Colombia for the past 40 years that will be commercializing the new variety. “These varieties are the product of an incredibly long and costly investigation that we do not have the resources to conduct ourselves. In turn we work to ensure that the variety can reach the hands of the farmers and consumers that need it most,” said Miguel Lengua, director general of Maxi Semillas S.A.S.

The variety will be sold at a similar price to currently available maize varieties in Colombia, and certified seed will be available beginning in August.

BIO-MZN01 will also form part of a new initiative in Colombia called “Semillas para la Paz,” or Seeds for Peace, which seeks to provide improved seed varieties as an alternative to illicit crops. The program, organized by the Colombian government and the Colombian Agricultural Research Corporation (CORPOICA), will promote the cultivation of nine different crops, including maize and beans. Over 20 tons of this new zinc-enriched maize variety will be produced by Maxi Semillas for this program, along with an iron-enriched biofortified bean variety developed by CIAT with HarvestPlus.