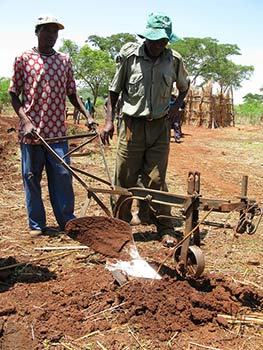 Malawi, Zambia and Zimbabwe are the most maize-dependent countries in southern Africa, relying on the crop for 40 to 50% of both calories and protein consumed. MAIZE national partners – national agricultural research and extension services (NARES), small and medium (SME) seed companies, non-governmental organizations (NGOs), community-based organizations (CBOs) and others – determined that southern Africa in particular is a high priority region for the development and dissemination of stress-resistant germplasm as the region has a dangerous combination of increasing temperatures in tandem with rainfall scarcity.

CIMMYT’s findings are recent enough to mean that many maize varieties in circulation have been bred to express one or both of the “solo” genes, but very few have been bred with the “combo” gene in mind. Many drought-tolerant varieties currently in use in southern Africa could see considerable yield drops if they are exposed to heat stress at the same time, a high likelihood in Zimbabwe and other countries of southern Africa.

CIMMYT and CCAFS are now rolling out strategies to ensure that improved varieties are productive even when exposed to multiple, concurrent stressors.

In light of these results the Drought Tolerant Maize for Africa (DTMA) breeding is now screening maize cultivars to eliminate from the pipeline varieties that will not hold up well to future climate demands.

Zimbabwe’s Crop Breeding Institute is teaming up with CIMMYT-CCAFS to screen existing cultivars for the presence of the combo drought/heat tolerance trait. Their aim is to flag drought-tolerant varieties already in circulation that could be susceptible to heat stress – quality control of sorts – and to prevent the release of new varieties that are missing the necessary characteristics. The work was recognized by MAIZE as critical for bolstering national capacity to address drought and heat stress in maize breeding, and resulted in funding for a new breeding program.

Further reading:
Identification of Drought, Heat, and Combined Drought and Heat Tolerant Donors in Maize
CIMMYT and CCAFS are now rolling out strategies to ensure that improved varieties are productive even when exposed to multiple, concurrent stressors.