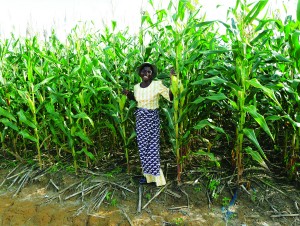 Despite some quibbles, CA is widely considered as having an important role to play in strategies contributing to global food security and improving resilience and adaptation to climate change. It is built around a core set of interlocking soil-and water-conserving practices which create a more self-sustaining and integrated farming system – particularly through minimum tillage, retention of residues, crop rotation, and promotion of crop diversity.

Despite CA attracting considerable attention in many parts of the developing world, only one researcher in the whole of sub-Saharan Africa, Prosper Nyanya, has specifically considered gender and gender relations. In particular, Nyanya has researched the effect of CA on women’s labor allocation and labor intensity, household food security and other gender issues in Zambia. Other peer-reviewed literature does mention gender, but usually more as an afterthought, and while some useful project-based literature does exist, it is limited by a lack of technical rigor.

“Our starkest and most incontrovertible finding is that basin-based CA is an approach largely designed for, and taken up, by women (and some poor men),” explains Cathy Farnworth, Gender, Agriculture, and Social Development Specialist and CIMMYT consultant, describing the CA technique by which crops are planted in hand-dug planting basins rather than tilled rows or ripped lines. “This is extremely labor-intensive, whereas mechanization options are mostly taken up by men.” Even in the same household women will often be engaged in basin-based CA while men use mechanization.

Herbicide use is very important in suppressing weeds, but many farmers feel they cannot afford it. Women’s labor is often perceived as ‘free’ – even though time spent on weeding may be diverted from childcare, household maintenance and other income generation opportunities – and regardless of CA tillage system, women typically weed their husband’s fields as well as their own when herbicides are not used.

Conversely, where herbicides have been used, the release of women from weeding tasks has resulted in all sorts of benefits. The ability to purchase herbicide is not merely a matter of income; it is also a matter of intra-household decision making around how to allocate resources, encompassing both willingness and ability to pay. Women in wealthier male-headed households may not be able to argue successfully for the purchase of herbicides; women in female-headed households may lack the resources to do so.

Worryingly, the limited evidence suggests that existing gender and social inequalities may be worsened when interventions are poorly planned. Much training on CA, for example, is delivered through ‘lead farmers,’ but selection criteria can automatically exclude the majority of women and poorer men. Livestock are often treated as a potential destabilizing factor in CA systems, particularly because they compete for use of residues. However, livestock offer women many benefits, partly because land ownership is not critical in many cases to livestock keeping, or because livestock can often be kept close to home.

These is also scant evidence regarding how effectively CA supports health or food and nutrition security objectives. Much more needs to be understood as to whether crop choice within a selected CA system supports household food objectives and how such choices are made. “We have a huge amount to learn, and we need to learn quickly, given interest in CA as a means of adapting to climate change,” Farnworth states. “So far, the evidence is worrying! Good empirical research will help us discover and develop good practices.”

Based on a paper by Cathy Rozel Farnworth, Jens A. Andersson, Michael Misiko, Frédéric Baudron, Lone Badstue and Clare M. Stirling, “Gender and Conservation Agriculture in Eastern and Southern Africa: Towards a Research Agenda,” submitted to the International Journal of Agricultural Sustainability.