Integrating gender into WHEAT and MAIZE CRPs: A leap forward 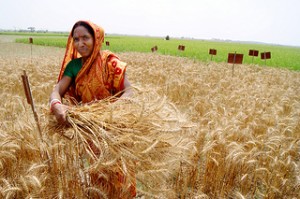 Addressing the gender disparities between women and men farmers in the developing world represents a significant development potential in itself. The FAO 2011 State of Food and Agriculture report estimates that if women had the same access to production resources as men, they could increase yields on their fields by 20-30%. According to FAO, this alone would raise total agricultural output in developing countries by 2.5-4%, which, in turn, could reduce the number of hungry people in the world by 12-17% or 100-150 million people.

The meeting was led by SAGARPA Undersecretary for Agriculture, Mariano Ruiz-Funes Macedo, Hans Braun, Director of CIMMYT’s Global Wheat Program, and Bram Govaerts, leader of the Take it to the Farmer component of MasAgro.