During 2016, the CGIAR Research Program on Maize (MAIZE) made strong progress on both of its research strategies, stress resilient and nutritious maize, and sustainable intensification of maize-based systems. In total, 111 improved maize varieties based on germplasm from MAIZE lead centers, the International Maize and Wheat Improvement Center (CIMMYT) and the International Institute of Tropical Agriculture (IITA), were released through MAIZE partners in 2016. These include 76 in sub-Saharan Africa, 27 in Latin America and 8 in Asia. Besides high and stable yield potential, some of the special traits stacked in these varieties include drought tolerance, nitrogen use efficiency (NUE), tar spot complex (TSC) resistance, Quality Protein Maize (QPM), increased provitamin A content (through the CGIAR Research Program on Agriculture for Nutrition and Health – A4NH), ear rot or mycotoxin resistance and Turcicum leaf blight resistance, among others. 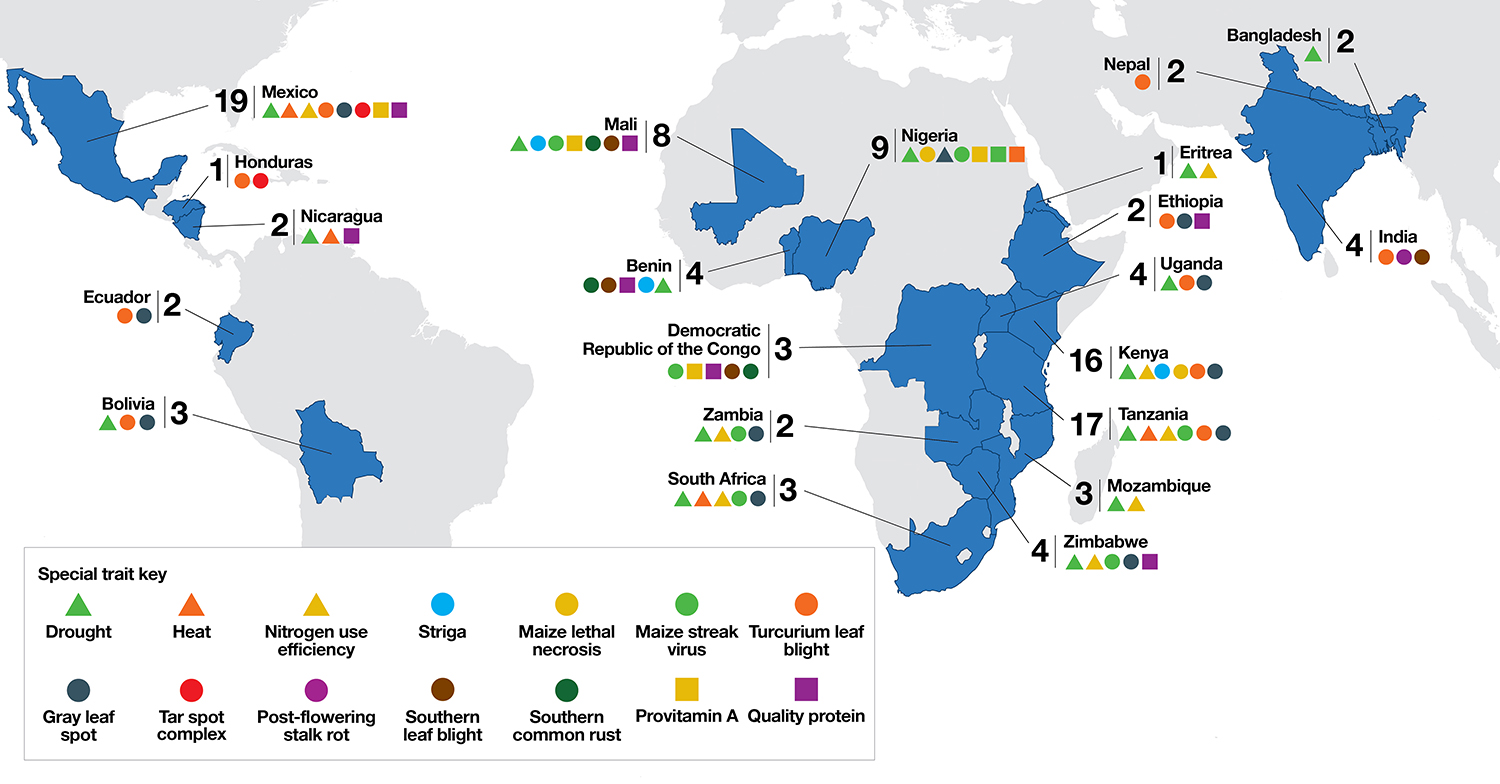 *Improved maize varieties released by MAIZE partners in 2016, with depiction of some special traits. The map includes eight provitamin-A enriched varieties based on MAIZE germplasm that were released under A4NH CRP in Latin America and sub-Saharan Africa (1 in Mexico, 7 Mali,3 in DRC, and 1 in Nigeria) in 2016.

To view an interractive version of this map, click here.

Over 5.5 million hectares were under improved MAIZE-derived technologies or management practices in 2016 as a result of CRP research; directly reaching more than 11 million smallholder farmers. As we transition into Phase II (2017-2022), MAIZE remains committed to finding sustainable solutions to the challenges faced by smallholder farmers around the world. From emerging pests and diseases such as fall armyworm and maize lethal necrosis, to drought and heat stress that threaten livelihoods and food security, MAIZE and partners are working together to help farmers feed our growing population under a changing climate. We would like to extend our deepest thanks to our donors, without whom none of this work would be possible.

Thank you to all who have supported and followed our work throughout Phase I (2012-2016), we look forward to sharing our updates and achievements with you in the years to come.