Bangkok – 29 October 2014 – More than 350 leading agricultural researchers, policy makers, farmers and service providers from across the public and private sectors gathered in Bangkok from 30th October – 1st November for the 12th Asian Maize Conference. Organized by the Asia-Pacific Association of Agricultural Research Institutions (APAARI), the International Maize and Wheat Improvement Center (CIMMYT), the Food and Agriculture Organization (FAO) of the United Nations and the Thai Department of Agriculture, the “Maize for Food, Feed, Nutrition and Environmental Security” conference will culminate in 10 major recommendations to set in place a roadmap for a sustainable intensification strategy for maize in Asia. 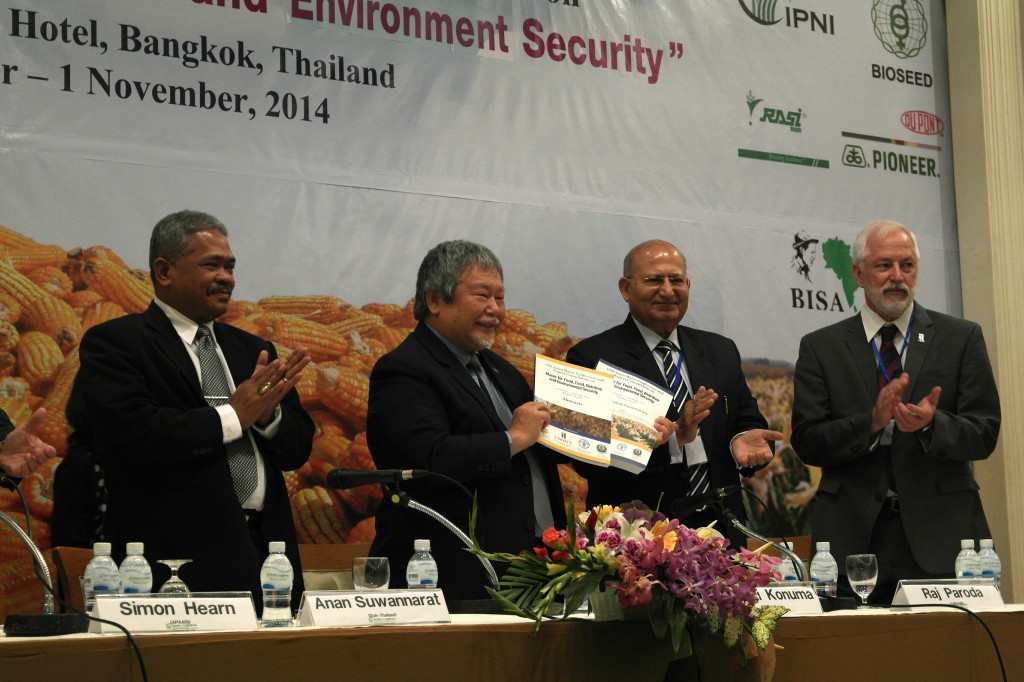 Guest of honor Mr. Anan Suwannarat, Director General of the Thai Department of Agriculture, “this forum provides us with a platform to create synergies among institutions and stakeholders, all of whom recognize the enormous value of maize as a food and feed crop.”

The objectives of the conference are to assess specific priorities to enhance maize production and productivity in the region, share the latest knowledge on cutting-edge maize technologies and generate awareness among institutions and stakeholders of better uses of maize as food, feed, fodder and as an industrial crop in Asia.

The area, production and yield of maize have increased several-fold over the last 50 years; much of that growth has occurred in the developing world. Compared to other cereals, maize has recorded the fastest annual growth (around 4 percent) in Asia. The demand for maize in Asia has been growing in response to changing consumer interests, in particular to feed the growing livestock sector.

At the same time, maize production and productivity in several Asian countries is severely constrained by an array of factors, including lack of access to improved seeds and other critical production-related inputs, lack of training and knowledge transfer for resource-poor farmers, and abiotic and biotic stresses, the magnitude and dynamics of which are rapidly increasing due to climate change. However, there still remains great scope to increase the area under maize production in the region, as well as tremendous opportunities for productivity increases and innovations in crop improvement, management and diversification.

“Among cereals, maize offers immense opportunities to address both food and nutrition security in Asia,” said Dr. Raj Paroda, APAARI executive secretary and conference co-chair. “Exciting scientific achievements in the recent past have led to higher annual growth in maize than all other cereals in the region. We now need to effectively harness the existing potential by out-scaling innovations in maize to have greater impact on livelihood of smallholder farmers.”

According to Dr. Thomas A. Lumpkin, CIMMYT director general and the other conference co-chair, “Sustainably increasing yields and stabilizing prices requires a concerted effort at the policy level, deployment of new technologies and long-term research investments to ensure that Asian farmers are prepared to respond to the enormous challenges facing agriculture.”

APAARI’s mission is to promote the development of National Agricultural Research Systems (NARS) in the Asia-Pacific region through inter-regional and inter-institutional cooperation. It contributes to sustainable improvements in the productivity of agricultural systems and to the quality of the natural resource base that underpins agriculture, thereby enhancing food and nutrition security, economic and social well-being of communities and the integrity of the environment and services it provides.

Headquartered in Mexico, CIMMYT is the global leader in research for development in wheat and maize and wheat- and maize-based farming systems. CIMMYT works throughout the developing world with hundreds of partners to sustainably increase the productivity of maize and wheat systems to improve global food security and livelihoods.