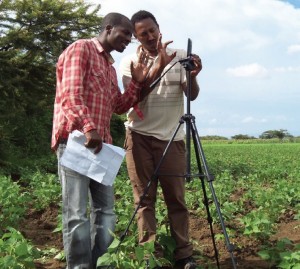 Presenting at the Borlaug 100 event organized by CIMMYT last March in Obregón, Mexico ‘to establish an exchange between research and extension leveraging technology,’ Digital Green’s young CEO, Rikin Ghandi, reaffirmed the organization’s mission: “We work with rural communities to produce videos to transform livelihoods.” These videos are of the community, by the community and for the community.

Partnering with agricultural extension systems of both governments and civil societies, Digital Green trains community members to produce 8 to 10 minute-long videos sharing testimonials or demonstrating new practices which will be disseminated by village-level facilitators among women’s self-help groups or farmers’ clubs. The videos are screened once every two weeks then the community shares its feedback. “There are intensification types of practices related to wheat production and some specific practices such as weeding or germination testing, connections to markets or government schemes,” Ghandi said. “We aim at both increasing the participation of the community into extension and making a two-way flow between research and extension.”

Digital Green initially started seven years ago as part of Microsoft research based in Bangalore, India in a group looking at technology for emerging markets. “There was no aspiration, we were just asking ourselves if there was a role for information technology in small-scale farming systems, nothing more,” Ghandi said. The NGO stresses the importance for each educational video to be produced in the local district. Eighty percent of the video content – lands, actors, facilitators on and off the screen – is also local. “People often ask ‘what is the name of the person in the video and which village does he/she come from?’ and that dynamic tends to keep people together on a recurring basis,” Ghandi said. “Some farmers adopt the practices just so they can be seen on video as role models in their respective communities,” Gandhi added. The practices that they highlight are then seen as a first choice, not a last resort.

A facilitator also records information such as who watches which video, what questions do viewers ask, what interests they express and whether they like the video or want to see something else.  After screening, the facilitator goes to farmers in the fields to physically observe if practices were adopted or not. “We have developed data management tools that work in both online and off-line worlds, which are also adapted to mobile devices and that allow us to maintain the history of the 150,000 farmers watching the videos to date. And just in the last two months, 40 percent of them have actually adopted one new practice,” Ghandi said. The data are all online and openly accessible for anyone to see. One can zoom in from the national to the state level, all the way down to see the practices adopted by an individual farmer. Digital Green is also working with the Cereal Systems Initiative for South Asia (CSISA), one of CIMMYT’s key projects, and the International Rice Research Institute (IRRI). For CSISA, which seeks to reach large numbers of farmers, collaborating with Digital Green was seen as an opportunity to leverage its technology-enabled model and grassroots-level partnerships with local extension agencies and rural communities to improve the efficiency and efficacy of the approach.

In order to connect urban audiences with agricultural producers in a fun and educational way, Digital Green developed a game called the Wonder Village, similar to Facebook games like Farmville and City Ville “where you build a virtual village economy, grow crops, supply them to industries, then provide the finished goods to various types of community buildings like schools or hospitals. In short you actually have to build this village together with the local community, which turns out to be the real famers that we work with,” Ghandi explained. Obviously not all farmers have connectivity but those who were given exposure to this tool were really excited, Ghandi said. In cities like Bombay, urban agriculture is picking up; some people are composting and using other practices similar to the ones presented in the videos. “Suddenly farmers in rural areas are connected with city dwellers looking at their videos and learning from them; it is better than the Bollywood dream!” Ghandi said.